Back to page
Edit

“Mari, Your heart is beating kinda fast... Are you okay? There`s no reason to be nervous...”
—Tiny Akko to Mari

Chapter 21.5 Is the third omake chapter of the Girl Friends manga.

Mari is going shopping with Akko in Shibuya, Akko asks Mari if that is Sugiyama in the distance and says that she is surrounded by guys. Akko calls Sugiyama and she answers Akko then says that she knew it was her and asks her what she is doing making all those guys spoil her and Mari wonders if she is dating all of them, Akko then says that she almost did not notice it was her and begins to ask her why she is wearing the different uniform to which Sugiyama covers Akko`s mouth to keep her quiet. All of the guys ask if Mari and Akko are there for the mixer too and Sugiyama tells them that they are not and that they are friends of hers from another school she then says that she will be in the bathroom for a minute, In the bathroom Akko asks Sugiyama what she meant by another school and asks her why she is wearing another schools uniform again, Sugiyama then apologizes and says that she borrowed it from a friend of hers who goes to N all girls school and tells them that it is because the N all girls school uniform is popular with the guys. Akko then asks Sugiyama if it is a mixer and asks her if she is wearing a uniform to it and she tells her that she is because she is pretending to be an N all girls student. Tamamin then bursts in the stall and says that she is too and she is

pretending to be Cure Dream Sugiyama then hits Tamamin causing her to fly due to her dislike of otakus. Tamamin then says that Sugiyama had told her that she should wear a different uniform to the mixer and Sugiyama annoyed tells her that she told her to wear a different proper uniform to which Tamamin says that atleast she had bought a second set of cloths just in case. Tamamin then says that the other is a Haruhi costume and her senpai from Anna Millers is also bringing one and asks Sugiyama if that would be better, Sugiyama then begins to undress Tamamin and Akko and Mari quickly leave. In the end she ended up wearing her regular uniform and Sugiyama tells Tamamin that she has to be more feminine and if she is going to be an otaku she is not going to invite her to anymore mixers, Tamamin then says that half of the guys liked it and Sugiyama tells her after that the other half were disgusted. Mari asks Akko if it was okay for them to be wearing their uniforms since they were on their way home from school and Akko tells her that she thinks it is best they don`t talk about it for now.

The neighborhood cat Nyanko shows up with Akko who is now tiny in it`s mouth and Akko asks Mari to save her, Mari asks Akko what had happened and she says she does not know what happened and that she had become like that before she realized and asks Mari what she should do. Mari in her thoughts says that Akko is cute tiny and apologizes, She then says that she ended up taking Akko with her to school hidden between her breasts. Mari tells Akko that she had gotten over her situation fast and Akko says that it is because she gets to see something so enjoyable and tells Mari not to worry and that she will be fine in her bra Mari then hesitantly tells little Akko okay. Akko tells

Mari that her breasts are soft and feel nice which causes Mari to blush, Akko then says that her heart is beating fast and asks Mari if she is okay and tells her that she does not need to be nervous Mari agrees and says that she is right. Mari in her thoughts says that the train was very crowded due to the morning rush hour she then says that Akko is getting squished and wonders what she should do, Akko in her thoughts says that it hurts and says she should move down some and begins to climb down. On the way down Akko unknowingly grabs Mari nipple which Mari feels and causes her whole body to react

and for her to let out a shout. In her room Mari tells Akko that she is never taking her to school again and Akko tells her it wasn`t like there was any other place to hide. 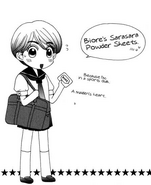 Urara telling what she brings to school at the start of the Omake. 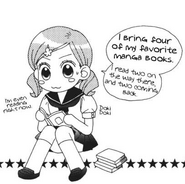 Tamamin telling what she brings to school at the start of the Omake.

Mari telling what she brings to school at the start of the Omake. 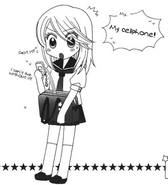 Akko telling what she brings to school at the start of the Omake.